Next steps… the ERA March and Rally to the US Capitol

I was deeply moved by the commitment of those whom made the August 26, 2015 – Women’s Equality Day – Blessing, March, and Rally a smashing success, for photo’s Click Here. I was touched by all the lovely tokens of affection, gifts, and awards bestowed on me.  I simply did not expect that.  When I heard US Senator Cardin’s and US Representative Speier’s statements I was moved to tears.  It went to the core of why I have walked so many miles.  So my prepared speech went right out the window and the story of my father whom I have rarely spoken of and how he was treated as a coloured man in this country and called a “nigger” a word I own not with pride but with a sad and heavy heart. And what I felt called to speak to is a country so divided by classism, racism, and sexism, a country whose people would so greatly benefit by passage of the Equal Rights Amendment into the US Constitution.

Stories I heard all my life swirling about in my head; instructions to never saying anything about my father being black; how I became my mother’s memory after a red brick fell nine stories landing smack in the center of her head; and then as a child of 12 going out to work selling newspapers door to door in Las Vegas to put food on the table, all those stories and more swelled up from deep within as I listened to one impassioned speaker after another.  And I whom spent a lifetime having been instructed to never cry in public and “keep a stiff upper lip” cried. I cried thinking of Katrina and the trust she put in me, and her stories, stories that she too had kept to herself. And I thought of my beloved husband William too. And I called upon a black woman who served several years in a federal penitentiary to read the Presiding Bishop’s Statement.

Many of you have asked what’s next? First off I will not be taking a break I am only going to come on stronger now.  The pilgrimage is a benchmark in the ministry of Katrina’s Dream to promote th passage of the Equal Rights Amendment.  And just like many doubted that I would make it all the way across the US and many have doubted that the Equal Rights Amendment hasn’t a chance in their lifetime – I know just like I knew that I would make it to DC, I know we are not that long off from the ratification of three more states. Ladies and Gents we are going to come on stronger than ever. The Time in NOW! 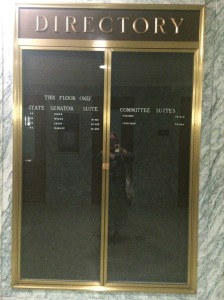 Helene Swanson heads to the Senate Judiciary Committee at the Dirkson Bldg at the US Capitol to urge them to move it out of committee.

So another part of what I have planned next is contacting each and every single US legislator and asking that they co-sponsor S.J. Res. 15 and H.J. Res 51 over the weeks ahead targeting the chair of the Judiciary and several other senators of key importance.  And those that have co-sponsored ask that put on their website  under Women’s Issues  that they have co-sponsored the “ERA Three State Resolution” to demonstrate their support for women’s rights.

This coming September 13th @ 9pm EST Tammy and Cathy are holding their monthly ERA Action National Call and I am hoping that many of you will call in so that we can go over the strategy for the upcoming weekly calls out to our legislators. The call in number is (605) 562-3140 and meeting code number is 787085#

And many of you have asked if I will be writing a book… the answer is yes. The book will be one of my spiritual journey and the difficult decisions I faced in the waked of my late husbands passing and how a simple statements less than two days after my husband’s death at the local church we attended “Don’t worry you find another man, you are young yet”, to surviving a 60 mph sand storm by hiding in a drain ditch brought me closer to the beauty of our earth, and how connecting with a large number of women and human rights activists across the country with each lovingly embracing me in my darkest moments, uplifting me, guiding me, every step of the way.  And praying, indeed praying to God every day to help me walk through aches, pain, and fever; and thirst and hunger when my money ran out months ago, having left with only $200 to my name as I would not – could not – go back to living the life as an oppressed woman in these United States.

Next the herstoric March to the US Capitol has morphed into an annual event. Yes that is correct – the pilgrimage which ended in an amazing march with a dedicated core group of human rights activists and rally to the US Capitol has turned into an annual event to promote the passage of the Equal Rights Amendment.  So please continue to invite your friends to our Facebook event page…https://www.facebook.com/events/1564990420427752/

Finally and most importantly, I want to thank all of you for making this amazing journey with me.  The love and care shown was emboldening and while most would think I might be tired and want a break I am more energized than ever.  So let’s do this… let’s pass the ERA!

Love and Light in Christ,